So, I finally got to see this ... um, interesting (not) and revealing (not really) movie about male strippers and their not-so-perfect lives.  I went with a female friend and some of her coworkers, all english teachers and no doubt starved for visions of adult man meat onscreen. 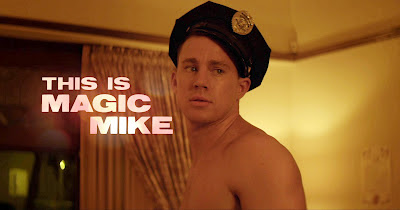 Unfortunately, none of us got it.

What men will produce for other men goes way beyond what anyone will produce for women.  Gay men know that other gay men want to see nudity and sex, just like straight men.  They don't want to see men dancing and gyrating coyly while tearing off breakaway pants and shirts to reveal everything but the main event, unless it's for comedic purposes.  They want to see totally naked men with erect cocks and beautiful asses.  And if women are honest, that is what we want to see as well.  But if we stay within society's expectations of 'ladylike' behaviour, we won't get to.  Oh, we will get the very occasional full male nude scene in a movie, usually of the aging, Harvey Keitel type, rather than the virile and pretty young hunk type.  And movies like Magic Mike that pretend to offer up a real stud-fest for the adult woman but instead deliver a toned down version of a Chippendales routine, making fun of the audience while at the same time coyly playing with their expectations. 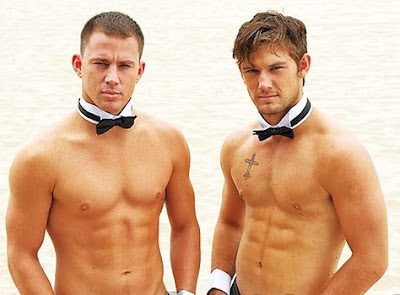 The movie was rated R, so all of the women in the audience were adults, most of them older and married.  Come on, we've seen naked men before.  Entirely naked men.  Erect and flaccid cocks, bare asses, etc.  Why, when naked women are everywhere, can't they show, IN A MOVIE ABOUT MALE STRIPPERS, a totally naked man???  Or a close up of his cock???

You can see I was disappointed. 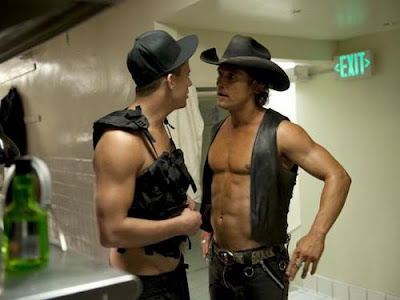 The most disturbing thing was the reaction of the predominantly female audience around me.

I was taken off guard when, during the first shot of a bare-assed (and presumably nude, although we never got to see the bits) Channing Tatum, most of the women shrieked and laughed with barely concealed excitement.  So I munched on my M&Ms and shrugged philosophically and waited for the real action.

There were some scenes of stripping performances, but most of these I had seen in the trailer.  In a later scene, I couldn't quite figure out what the audience was getting so excited about.  I noted an increase in vocal excitement/amusement around me as Dallas (Mathew McConaughey's aging bar owner) demonstrated to Adam (Alex Pettyfer's naive newcomer) the kind of dance moves he should be developing. I initially thought the audience was reacting to the not-so-subtle movements that Dallas was demonstrating.  I finally realized that the reason they were getting so excited was because Dallas and Adam were, seemingly innocently, miming a gay encounter during the demo.

It's kind of a sad commentary, like the crazy popularity of the Fifty Shades books, on how sexually repressed alot of women are in our society.  Most of them have no idea about, or are too ashamed to seek out, less societally accepted forms of erotica or pornography.  Sex, and the graphic depiction of sex, even the graphic depiction of men's bodies (penises included), remains taboo, although most women have seen and enjoyed men's naked bodies since they attained adulthood.

Why on earth can't we be more open about it? 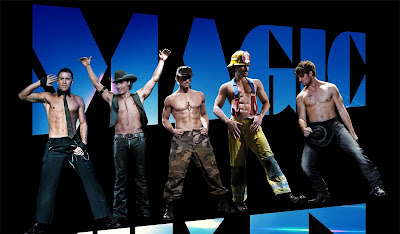 Ladies, the archetypes of the kind of men we fantasize about are largely the same as those that gay men find so alluring: The cowboy, fireman, army recruit, leather boy/man, and wild beast/animal/caveman.

You will see gorgeous hunks take off everything and do unspeakably naughty things to each other.

You will see big cocks and hairy (or hairless) balls, muscular men and youthful twinks in all stages of undress.

You will finally see attractive men taking it all off, and even better, performing sexually in an arena that doesn't even take you into consideration.

Come on, try it.  If you're not ready to watch it, then read it.  You'll be amazed at the frankness and undiluted sexuality of it.  Really, try it.  You know you want to...

And you'll never find yourself giggling at a male stripper movie again ;)

As many of you know, I was diagnosed with MS at the age of 39.  I just celebrated my 43rd birthday, 4 years relapse free and having received a very positive brain MRI result this past year.

My husband emailed me this link because he saw one of the women interviewed on the morning news channel:

When I watched the video and read about these two incredible young women and what they endeavour to do, my heart swelled and my eyes teared up.

Talk about grabbing life by the balls.  Talk about making the most of the days we have here on earth, of the abilities we do have while we have them, knowing that they can be taken away at any time by this disease or by another.  These women have overcome so much and continue to live with the daily unpredictability of a neurodegenerative disease that is just barely understood...

Please listent to their story, and discover your own finity, and why it is soooo important to appreciate what you have while you still have it.

~ Liz
Posted by AE Lister (formerly Elizabeth Lister) at 9:19 AM No comments:

The Sound of Sleigh Bells 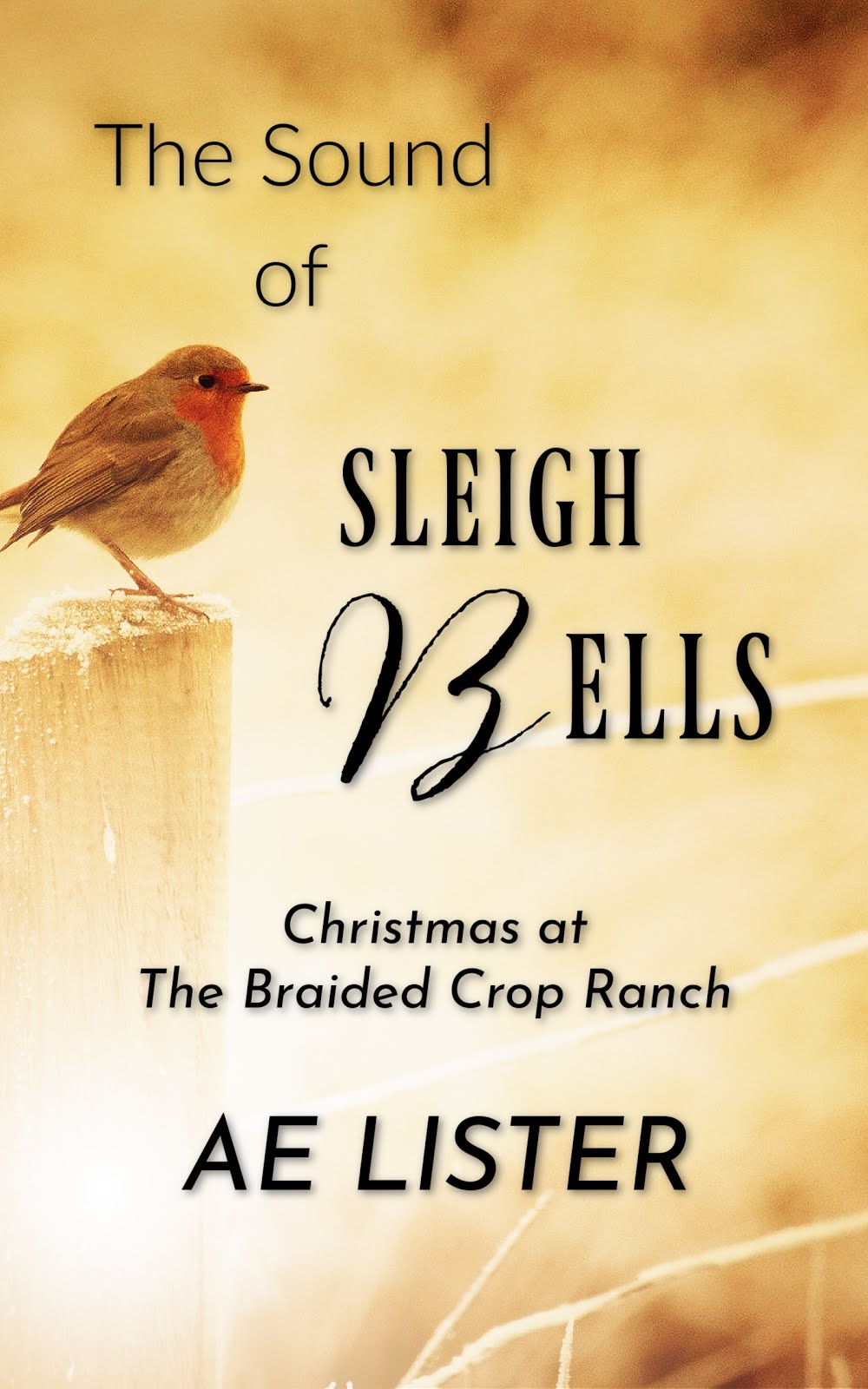 STABLE HAND (Book One in The Braided Crop Ranch Series) 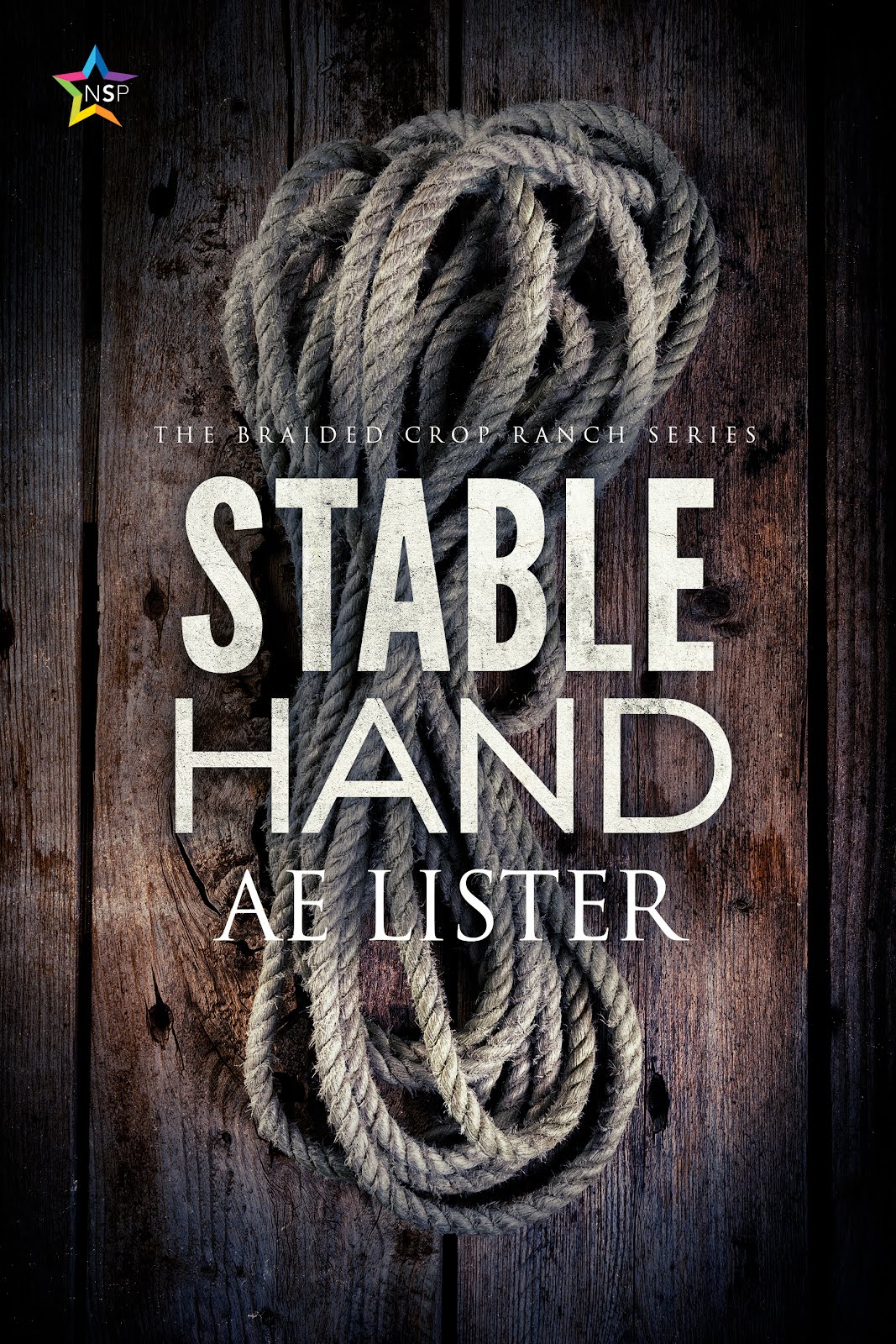 All the goods are here so check it out. New releases, backlists, all books.

I have the rights to permanent images on this blog. Photos that appear in my posts have been sourced from the internet. If you see a photo that belongs to you and would like it credited or removed, please send me an email at elizabeth@elizabethlister.ca